In this box are Pikes and Arquebusiers from Florence/Milan/Venice, Papal Guards EHI Halberdiers, a unit of anachronistically Red, white, and green EHC, and a gaggle of peasants!

There is also a nattily attired Italian Noble/Condottieri to lead them. 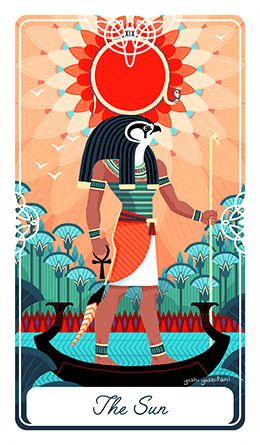 It may have been summer, but for most of the season here in New England, it was cooler than usual, cloudy, and rainy. Preferable to the wildfires and scorching heat in the Northwest and California for sure, though!

Gendarmes, especially French ones, are one of the key troop types we tend to associate with the Great Italian Wars. It seems almost every manufacturer who does figures for this era has Gendarmes!

The bulk of mine are by Essex, with a few Old Glory seen here as well. Also in this box are a number of mounted commanders.

Stradiots were light cavalry of ill repute during the era. Typically mercenaries, originally from Albania, they were usually armed with Javelins, although light lances were used at times. Like all Light cavalry, they were more useful for scouting, raids, and harassing enemy supply lines than on the battlefield. Never the less, they appear in a great many actions! Mine are by Old Glory and Essex.
Box total:  18 EHC Gendarmes, 27 LC/MC Stradiots, 6 mounted commanders.

Historicon was of course rescheduled for mid November (10th – 14th) this year, at the Valley Forge Casino/Resort in Pennsylvania. This is the closest of all HMGS convention sites for me, and easy 3 hour drive. As of last week, masks are now required of all on site. Since I have been wearing a mask for many hours at a time most days for a year and a half now, to me this is a small imposition! This year, all of my games will be run under the HMGS Next Gen banner, with all games being held in the Maple room, and all on the same table. With the nearby site, I am even running a Sunday AM game!  Here’s the lineup:

T09:473 Ramses II Greatest Hits #1 – Foes East and West Thursday, 9:00 AM, 4 hrs, Players: 8, Location: Maple/Juniper: MJ-5 GM: Peter Anderson & HMGS Next Gen Sponsor: None, Prize: None Period: Ancients, Scale: 28mm, Rules: To the Strongest! Masks Required? No Description: New to the throne, a young Pharoah Ramses II seeks to consolidate Egypt’s power by defeating an alliance of her traditional enemies – the Libyans to the West and the Canaanites to the East. The rules use a subtly gridded table, cards, and no dice! Easily learned rules, suitable for ages 12 to 92!

F19:474 Ramses II Greatest Hits #2 – Invaders from the SeaFriday, 7:00 PM, 3 hrs, Players: 8, Location: Maple/Juniper: MJ-5 GM: Peter Anderson & HMGS Next Gen Sponsor: None, Prize: None Period: Ancients, Scale: 28mm, Rules: To the Strongest! Masks Required? No Description: Egypt is being terrorized by invaders from the sea. Ramses and his army must defeat them once and for all! TtS! uses a subtly gridded table, cards, and no dice! Easily learned rules, suitable for ages 12 to 92!

S09:475 Ramses II Greatest Hits #3 – Battle of Kadesh, 1274 BCSaturday, 9:00 AM, 4 hrs, Players: 8, Location: Maple/Juniper: MJ-5 GM: Peter Anderson & HMGS Next Gen Sponsor: None, Prize: None Period: Ancients, Scale: 28mm, Rules: To the Strongest! Masks Required? No Description: Said to to be the earliest battle for which details and tactics are known, it is also thought to have been the largest chariot battle ever fought. Ramses had the story of his great victory over the Hittites under King Muwatalli literally carved into stone. Many historians suspect the battle was closer to a draw. TtS! uses a subtly gridded table, cards, and no dice! Easily learned rules, suitable for ages 12 to 92!

Z09:478 Oars and Cannons, Muskets and Swords! Sunday, 9:00 AM, 3 hrs, Players: 6, Location: Maple/Juniper: MJ-5 GM: Peter Anderson & HMGS Next Gen Sponsor: None, Prize: None Period: Renaissance, Scale: 15mm, Rules: Galleys and Galleons Masks Required? NoDescription: Renaissance naval warfare was a mixture of cannon and short range missile fire, boarding, and even ramming! The large 15mm ships and crew bring it all to life in this clash of 2 opposing squadrons. Ages 12+ are welcome.

Last week it was time to introduce Thomas and Peter C. to For King and Parliament, by Simon Miller and Andrew Brentnall.  FK&P is based upon the To the Strongest! engine, and I recently purchased the pdf version of the FK&P scenario book, Marlowe to Maidenhythe, written by Robert Avery. 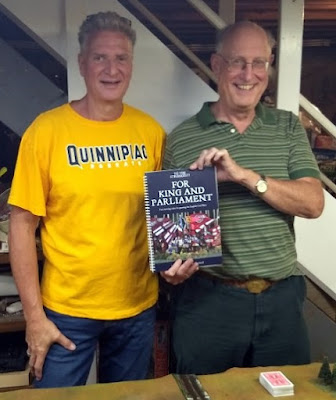 Thomas and I pose with the FK&P rule book.

We started with Scenario 1, naturally, the first of nine linked scenarios in a fictional campaign (there are three additional,. related scenarios as well), The Attack on Marlowe. 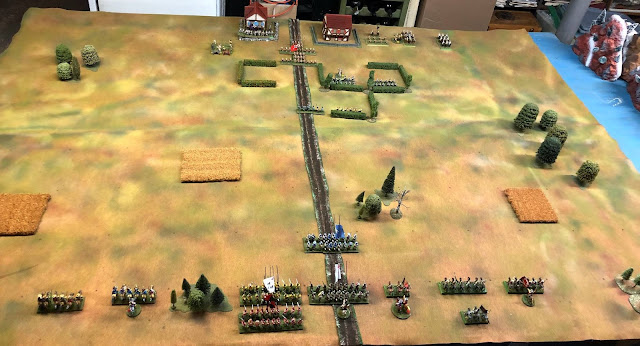 View from behind the lines of the attacking Royalist faction. 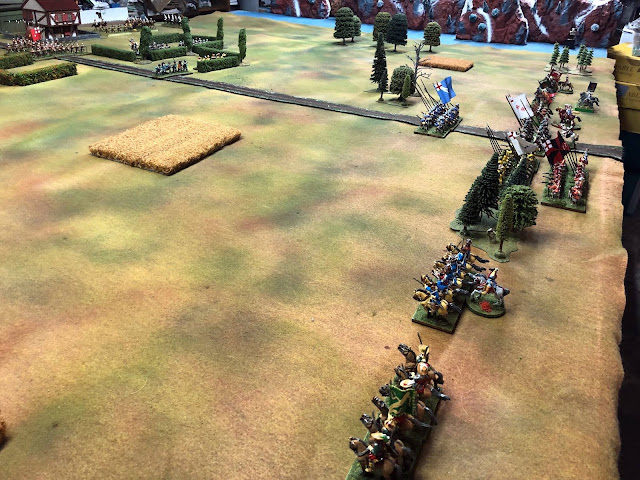 View from the Royalist left… 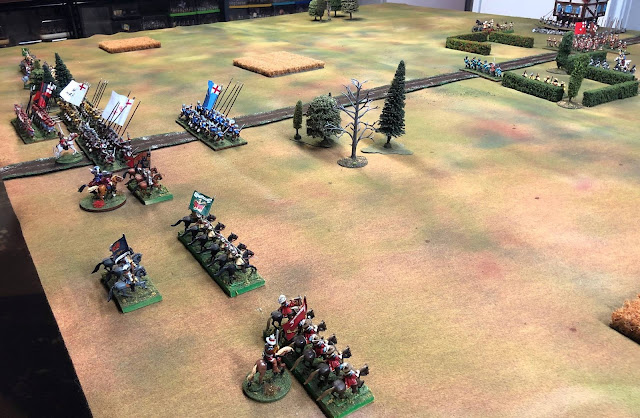 View from the Parliamentary right. I made an error in the initial setup which we corrected at the start of the game. The light guns are actually markers, and one starts attached to the Brown regiment, and the other to the Red regiment, which actually belongs where the two guns are now. 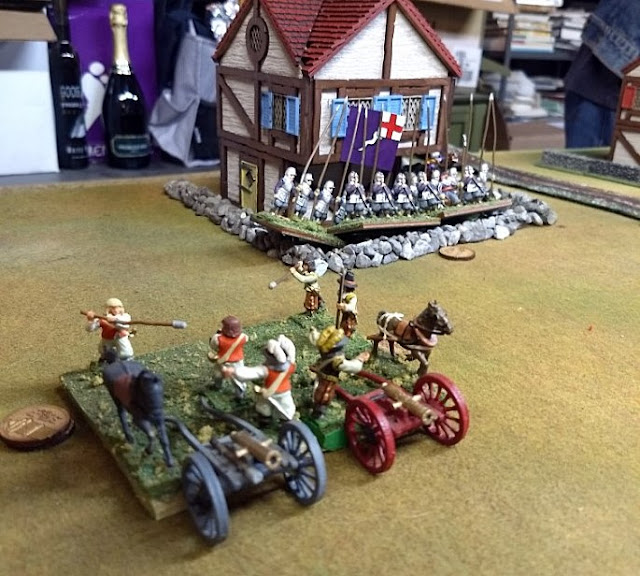 Close up of the Light Gun markers; these are the only artillery in the first scenario. Each gets 2 shots once deployed. 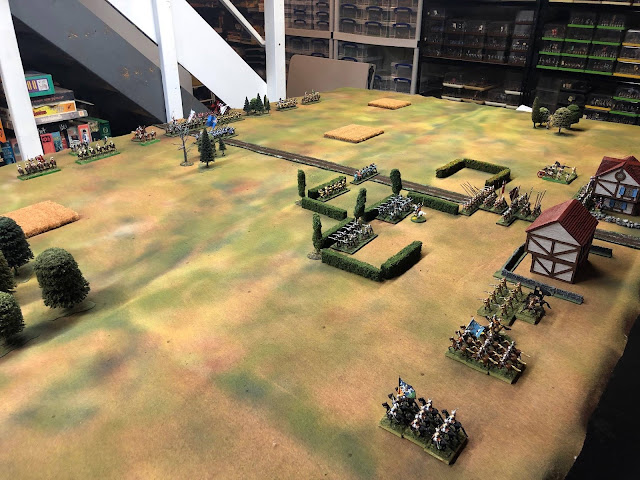 Set up as seen from the Parliamentary Left. 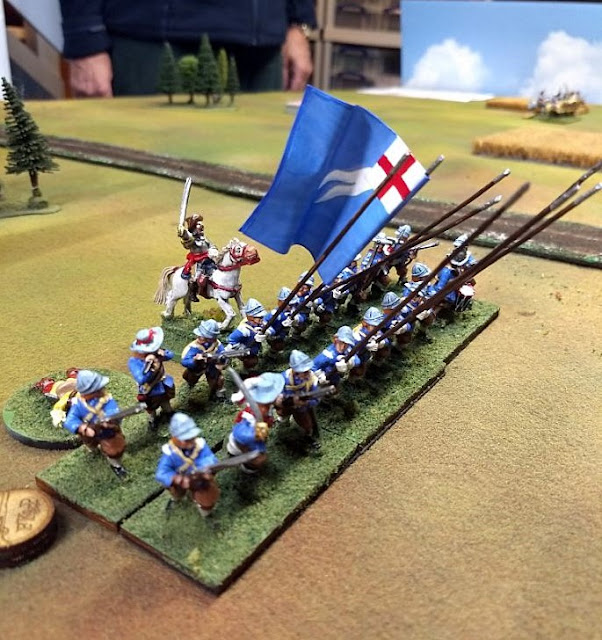 The Royalist forces advance as expected. The opposing 1 hit Forlorn Hope unit manages to inflict no less than 3 hits on the forces loyal to the King over the course of the game. 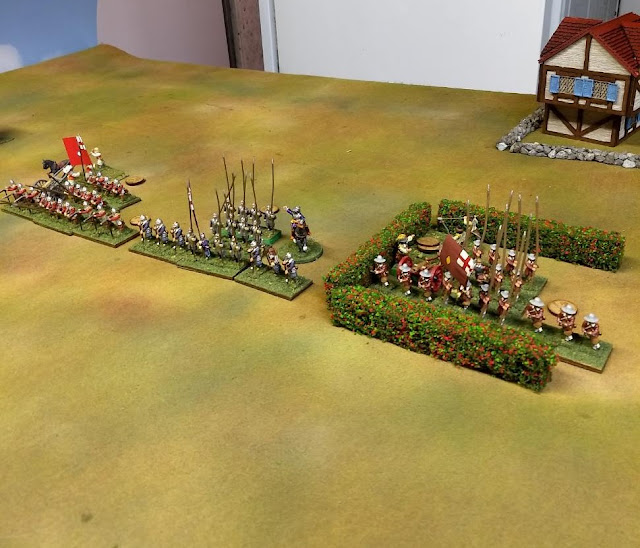 Parliamentary Foote advances on their right… 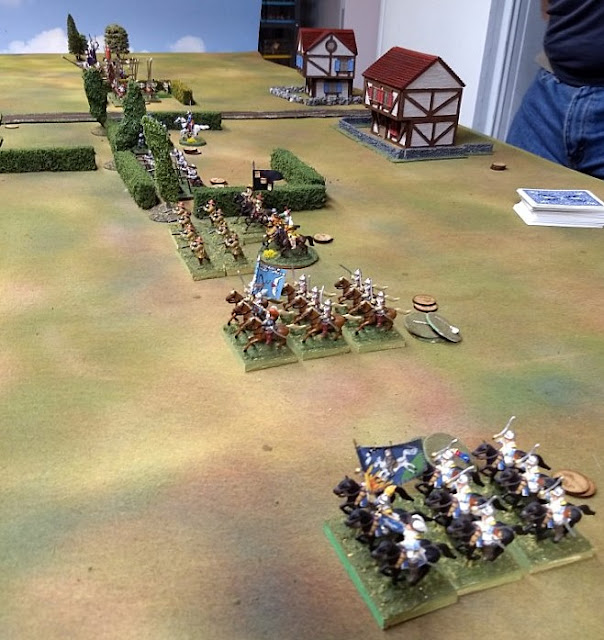 as does their Horse and Dragoons on their Left. The Parliamentary Horse all use “Dutch” style tactics for this scenario. 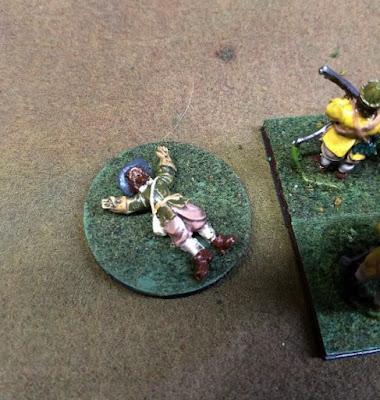 The Forlorn Hope, hence forth know as “Seymour’s Sharpshooters” score another hit on the advancing Royalist Foote. 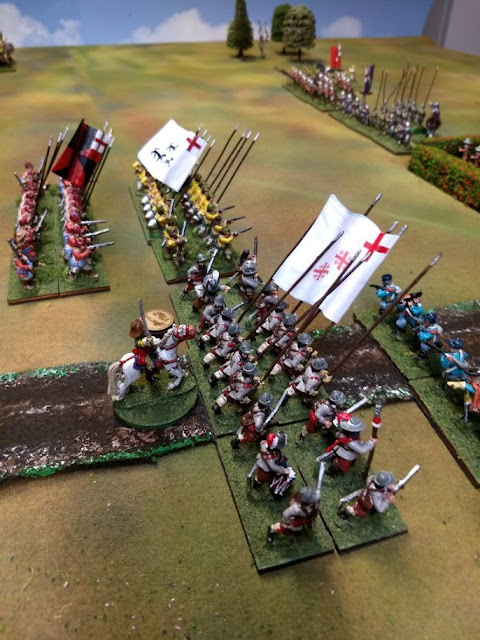 Thoroughly annoyed with the impudent Sharpshooters, the Royalist Foote closes to “Push of Pike” 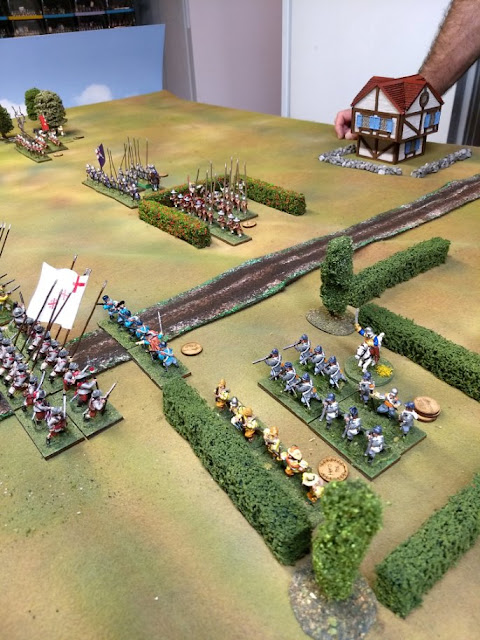 Overview of the Parliamentary Center and Right. 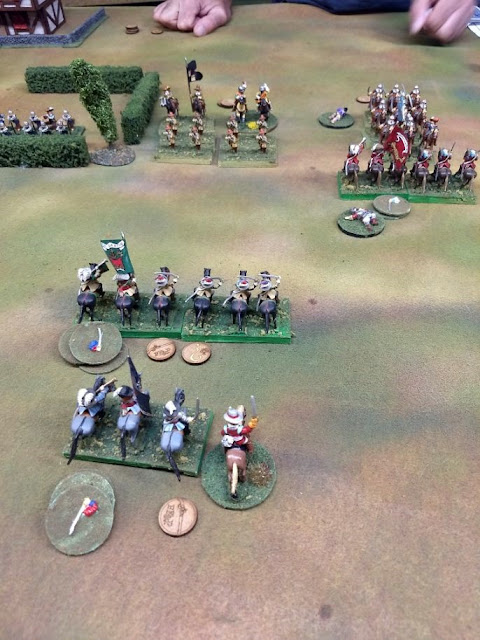 Royalist “Swedish Drill” Cavalry charges a unit of Parliamentary “Dutch:” horse. Defensive Pistol fire scores one hit, and the unit is eliminated in the subsequent charge! 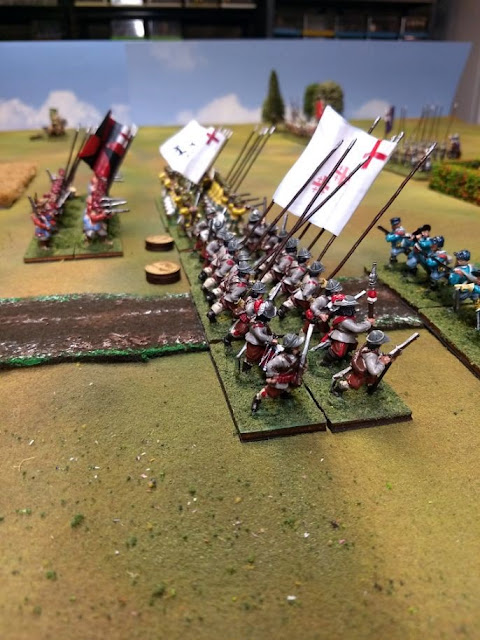 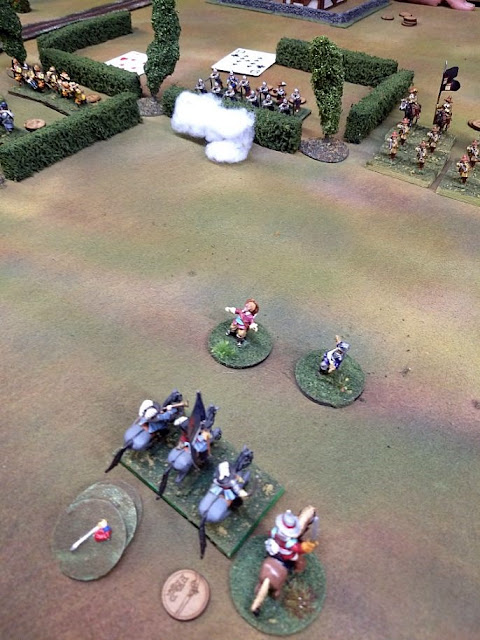 Parliamentary “Commanded Shot” shoot long range at an “untried unit of Royalist Horse; they fail their Morale check for being untried and shot at, and then fail to save against the hit as well – poof – unit gone. The once strong Royalist Horse on their right is now in serious trouble! 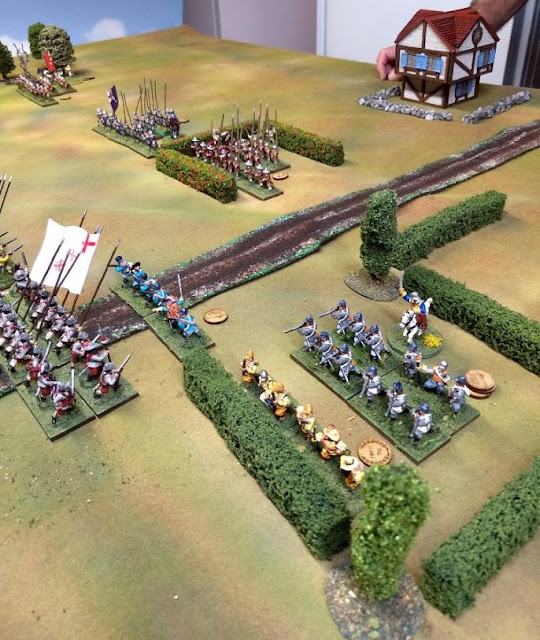 Stasis in the center as the Parliamentary Forlorn Hopes pop off shot after shot! 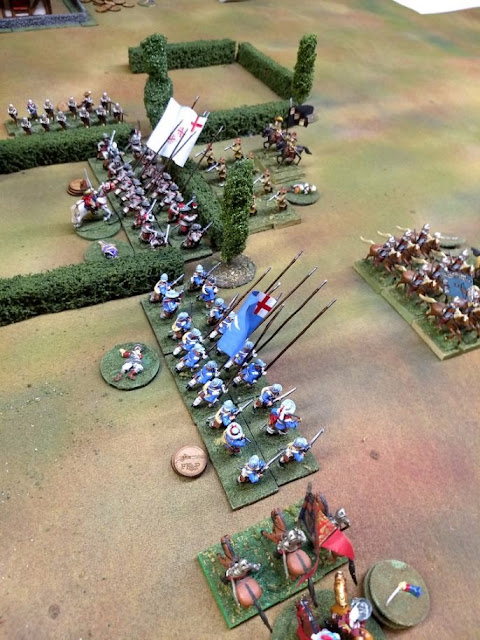 The Royalist White Foote Regiment has broken through Seymour’s Sharpshooters at last, and then turned the flank and over run one of the commanded shot. It in turns suffers heavily from close range fire into its flank from its sister unit of Commanded Shot, suffering 2 hits! 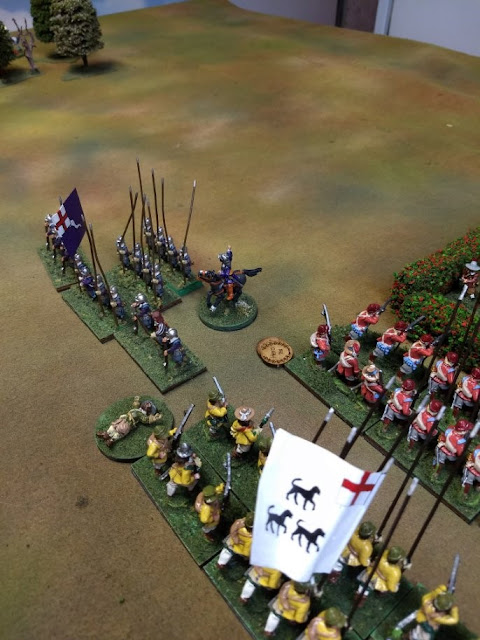 The Parliamentary Purple Regiment moves forward on the flank of the Red and Yellow Royalist units. Off on the fart Parliamentary right, their isolated Red Regiment is out maneuvered and ridden down from behind. Ouch!  Forming Hedgehog might have been a better choice! 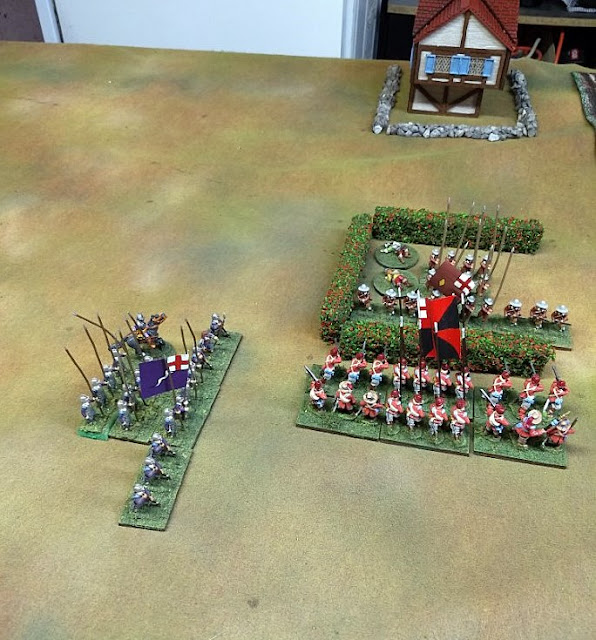 Parliamentary Purple regiment turns onto the flank of the Royalist Red regiment, which in turn is one hit from destroying the Brown Regiment to its front! The Parliamentary Foote are all Pike Heavy in this scenario. 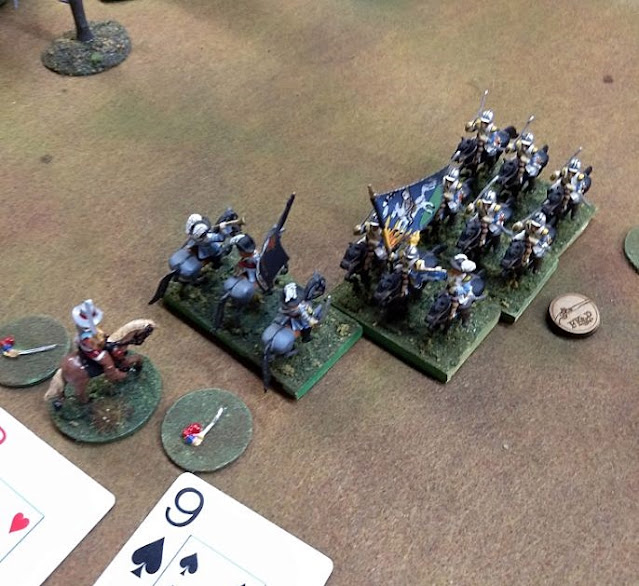 A “deep”, 3-hit unit of Parliamentary “Dutch” drill Horse charges a small unit of Veteran Royalist “Swedish” drill Horse. The Royalists countercharge, and thus play THEIR hit cards first – 2 for Horse in melee, one for expending a “Dash” marker in the countercharge, and a fourth card for shooting their Pistols as they charge home. Needing 8+ to hit, I score a hit with all 4 cards; the defenders can save only one of the hits and are thus eliminated without being able to fight back. Triple ouch! 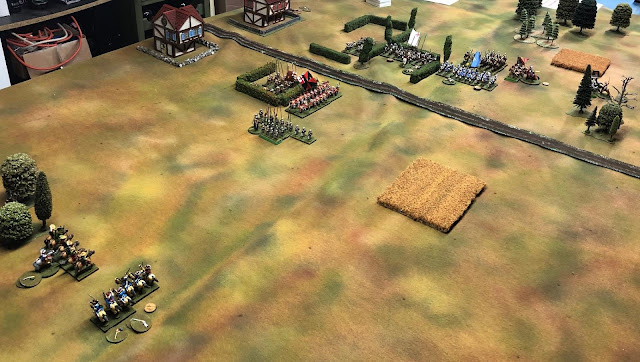 Game Over, man! Overview of the situation at game’s end from behind the Royalist left… 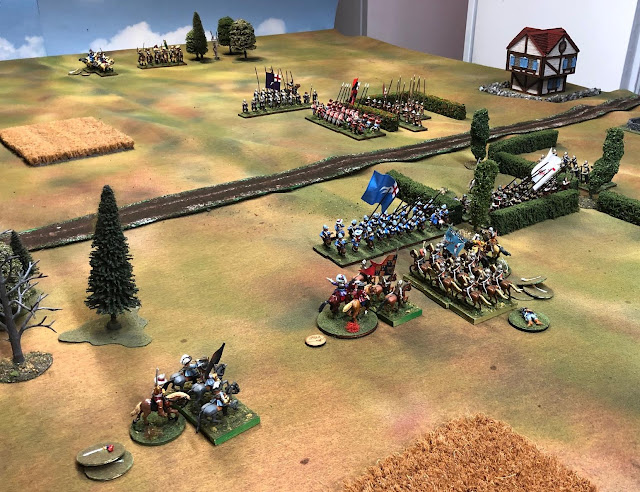 and from the Royalist right. 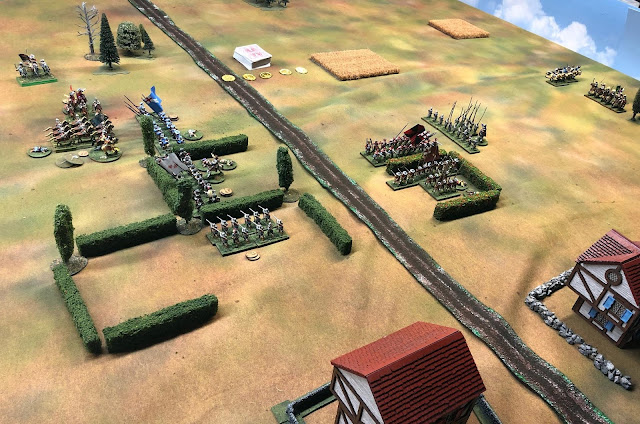 A final view from behind the Roundhead lines. The Cavaliers had 5 medals out of 12 left, but had they not won by destroying the charging Cavalry, they would highly likely have lost both their Red and White regiments on the Roundhead move, and thus lost the action themselves! 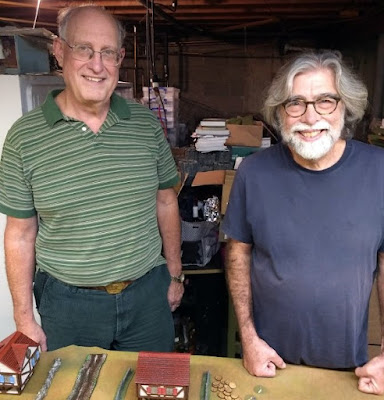 Peter C. (right)  commanded the Parliamentarians, whilst I (left) commanded the Royalist Horse and Thomas the Royalist Foote. There are Scotts in the later scenarios, so there may be another Old Glory order in the not distant future!
We all agreed the scenario was a good one, and that the FK&P rules play even better than TTS!; TTS!, 2nd edition, which is at least a few years away, will likely adopt some of the changed mechanisms found in FK&P. We also discussed what would be needed to bring FK&P to the 30 years war, and the later conflicts of the 17th century. Overall, I don’t think it would be much: deciding how to handle Tercios, adding Light Cavalry and some Light infantry skirmishers, evasion by same, and allowance for heavier lancers like the Polish Winged Hussars would seem to be about it. Much of that could easily be borrowed/adapted from TTS! In any event, later this month we plan to play the second scenario, Wildbrooke Common.