The garrison for Rorke’s Drift has now been completed on a 1:1 figure ratio. Most of the characters have been included with just the Chaplain and Surgeon Reynolds missing. I have yet to find a suitable figure for those two in 6mm. 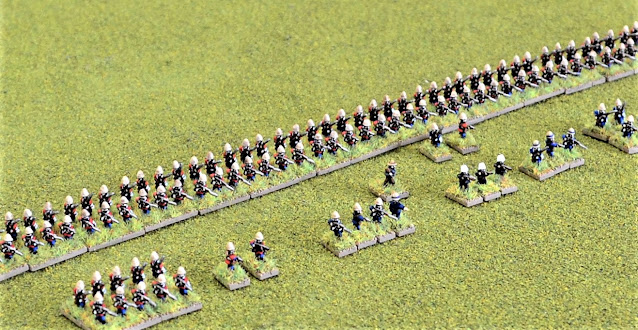 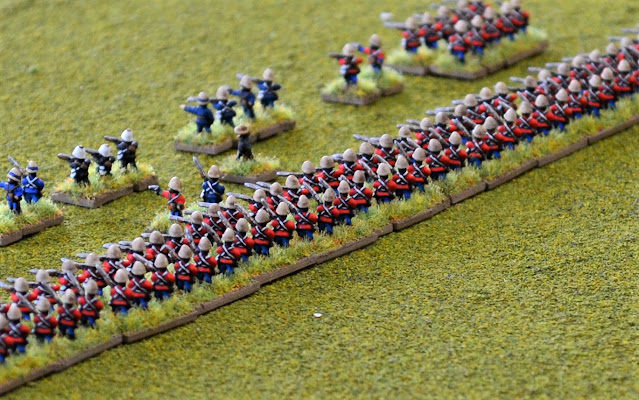 The idea behind the many single figure bases is to allow for a more random distribution around Rorke’s Drift. Bases are such that they can be ranked up uniformly. Each figure has a 6mm frontage x 10mm depth. The only exception being Daniels who has an 8mm frontage for the Pony Wars project.
There were 30 men recorded as wounded in the hospital but most were capable of fighting. I have therefore deducted around 10 from the overall strength to allow for those too incapacitated with the rest added to the ranks.

Apart from basing a few more armies (yes, I discovered another half-painted army from Micropanzer) I figure my 15mm phase has run its course.  This is my last “army in an hour” before I switch to more labour-intensive 28mm.

I also found some GZG drones which I’ll add to my ‘not Terminator’ army from Rebel Minis.

I don’t actually have any Dark Eldar so this 40K barge will belong to the Sisterhood. It’s more impressive in 15mm anyway.

Mantic & Deadzone  Anyway, I’ve finished assembling my Mantic Enforcers. I’ve also read through Deadzone 2E (even though I intend to make/play my own rules) and have been favourably impressed. It’s certainly a quicker, cleaner, more logical game than Kill Team. Rather like Dreadball compared to the bloated, clunky Blood Bowl – I used to love Blood Bowl but man it’s a gluggy mess – even nostalgia goggles and the – (for GW) – reasonable pricing can’t get me back into it.  Sadly I don’t have a square mat to playtest the Deadzone rules, as they seem quite interesting.

In this box are Pikes and Arquebusiers from Florence/Milan/Venice, Papal Guards EHI Halberdiers, a unit of anachronistically Red, white, and green EHC, and a gaggle of peasants!

There is also a nattily attired Italian Noble/Condottieri to lead them.

At the start of the month I took my Orks to October’s DZ Day over at Table Top Events in Belper. My understanding is that this now monthly event came from the mind of Winters – he was apparently going to be organising the games at this one but was running fashionably late so some hasty planning saw Da Vipers teaming up with some sneaky Blood Axe Boyz (commanded by Kris B) and an army of weird Squigs (actually Tyranids led by Russell). The mostly green xenos forces were up against Adeptus Astartes of three chapters; The Black Templars (marshalled by Josh), The Emerald Knights (Dark Angel rules, led by Rik) and the Space Wolves (run by Sam who I’m not sure is on Instagram, but his awesome Thunderhawk was painted by March of War.) 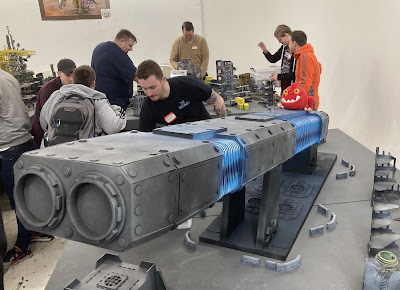 It was decided that the Orks would definitely be fighting to loot the giant gun, so we took this table, and I immediately claimed it with my squiggy mascot. The game would be around 5000 points per side including super heavies, fought over six objectives placed around the gun itself, scored at the end of the battle round. Whoever controlled the most got a point, and got to fire the giant gun towards one of the other tables, creating a huge blast of mortal wounds (I assume it was firing on low power or it would probably just obliterate the whole table). 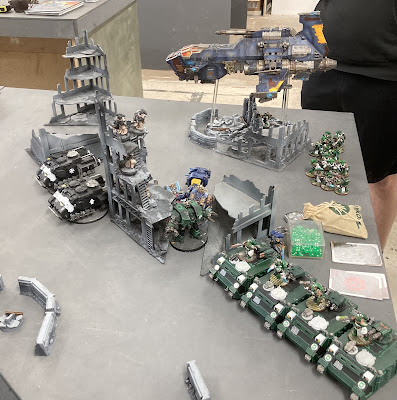 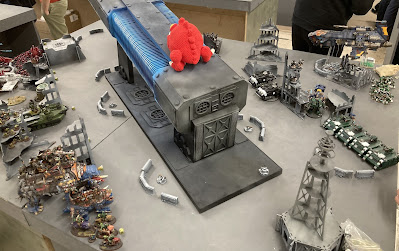 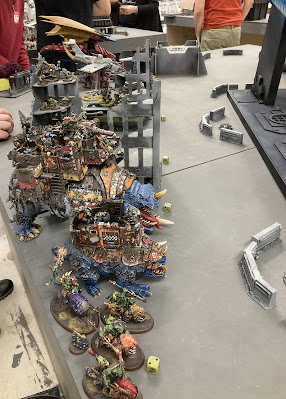 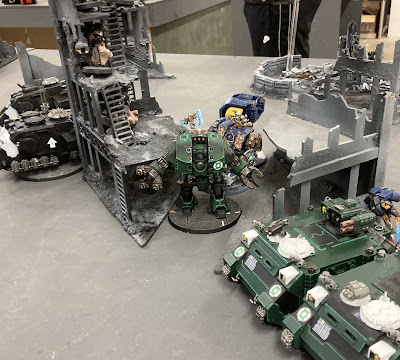 Deployment saw my forces bunched up to go for a pair of nearby objectives, while the Blood Axes went up the middle and the squigs would swarm over the sparser left flank. The Imperials provided a block of transports to rush onto objectives and a hard centre of dreadnoughts to march in behind. There were a lot of elite units loaded up into the various vehicles. The Marines got first turn, which was going to hurt, but at least it would give us the option to steal objectives at the end of the round. 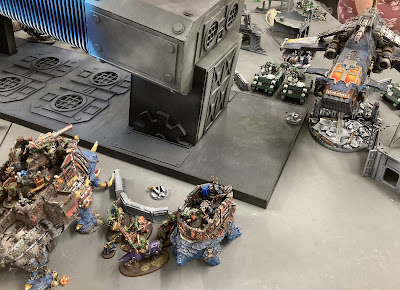 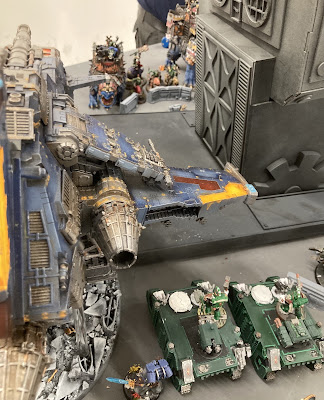 Sure enough, turn one the wall of green raced towards me, and so did the Thunderhawk, unloading it’s full payload into Nipper the Gargantuan Squiggoth. Nipper is a tough old boy though, and weathered the storm of fire. The Black Templars zoomed up the centre, but left the far flank pretty undefended. 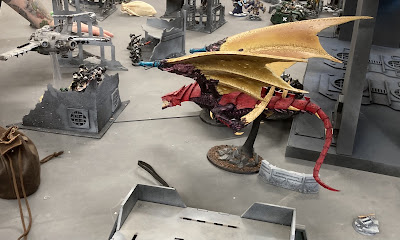 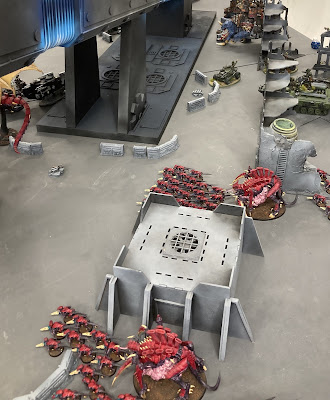 In our turn the squigs made their way out of cover towards objectives, while the Blood Axe jet and big flappy squig (Harridan) zoomed around to harass the Templars. As one might expect for Ork shooting, there were not too many significant casualties, but we did hold enough objectives to draw the first round. 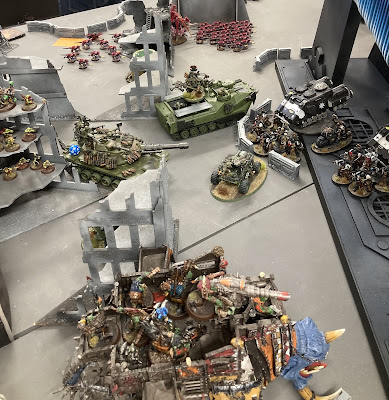 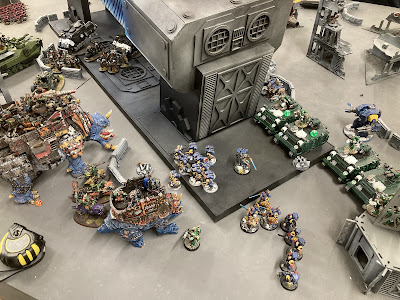 Turn two saw a whole load of killy elite Marine boys disembark across the line. The Thunderhawk dropped off a whole load of Wolf Guard and some characters, including the warlords for both the Space Wolves and the Emerald Knights. Shooting poured in but both Squiggoths managed to hold on until melee, when a blob of Space Wolves only just managed to bring down Nipper Jr, and Nipper himself was killed by Black Templar Blade Guard, after he ate two of them! 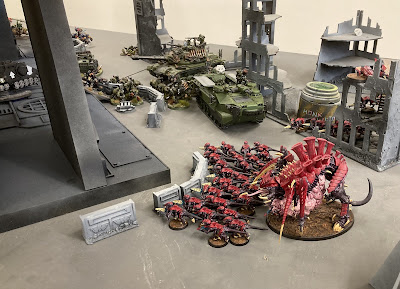 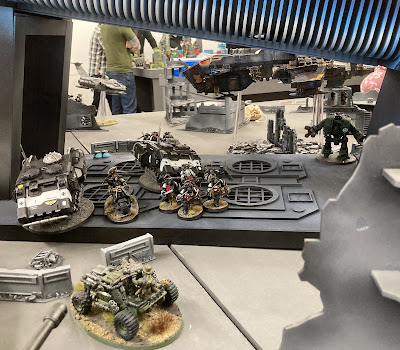 I was taking the brunt of the damage, but the Blood Axes were still holding strong and the Squigs were still swarming – the Thunderhawk targeting the Harridan but failing to down it. 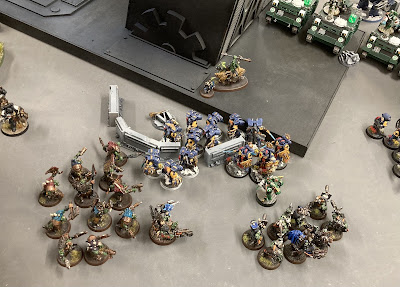 Our turn two and time to respond with violence! Beast Snagga Boyz, Tankbustas, the remaining Squighog Boy and Redtoof himself picked targets for their charges… 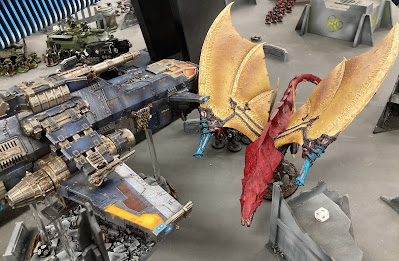 The big flappy squig flew over to engage the Thunderhawk, surviving overwatch but sadly rolling poorly for it’s attacks. 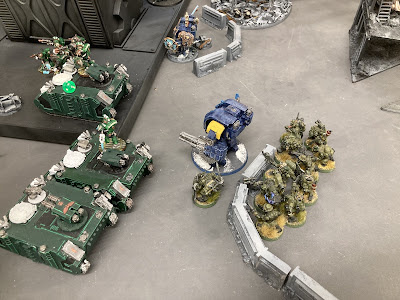 Snikrot and his Red Skull Kommandos turned up from the shadows to harass the rear of the Marine advance, crippling the Wolves Leviathan and drawing some attention backwards. 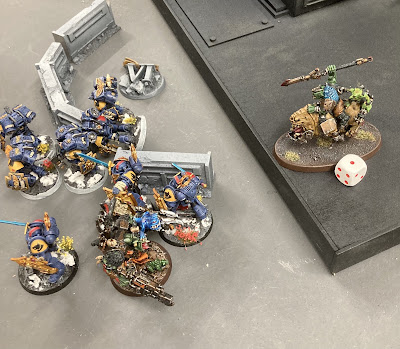 A mixed charge phase for us – I believe the Blood Axes did some good damage, but the Beast Snaggas bounced off storm shields and were battered by the Wolf Guard. However the Squighog slammed into the rear of a Rune Priest and skewered him with a rokkit powered stikka, and Redtoof himself slew the Emerald Knight’s Captain in single combat! WAAAGH!!! After that we were once again equal on objectives. 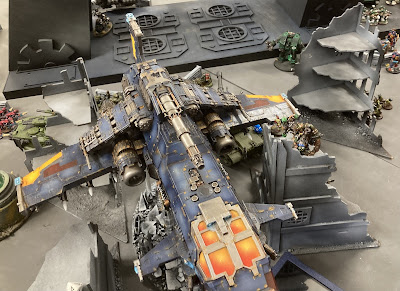 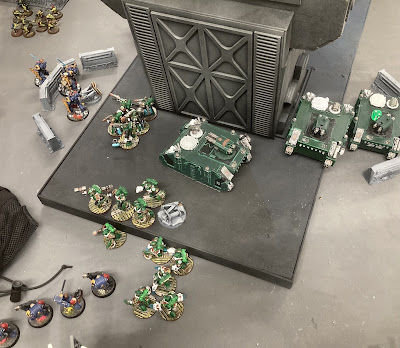 Turn three saw the Thunderhawk fly into our lines to cause havoc with the Blood Axe armour, and give my Big Mek a bit of a fright! One of the Black Templars then took down the injured Harridan the T-hawk left behind with a pistol shot!
In my corner of the board, the cowardly lapdogs of the Emperor formed a firing squad to execute Redtoof, rather than face him in honourable combat, though he did take a lot of dakka to remove. I was almost out of the game at this point, down to only the Mek and some Gretchin. 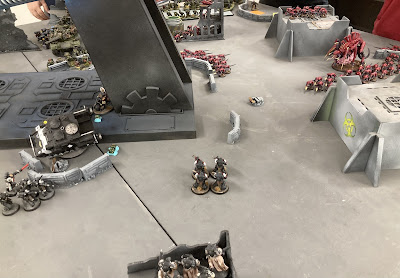 However as mentioned all the attention on me had left the far flank pretty open for the squigs to swarm in. The Imperials managed to hold the gun at the end of three though to go into the lead. 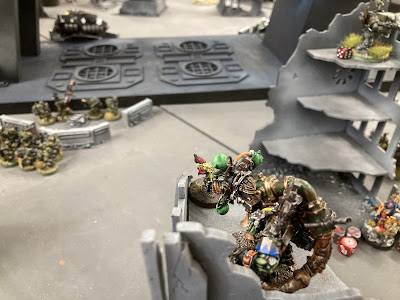 Turn four featured the Marines consolidating my corner to try and remove the Kommandos – they had to send in extra Dreadnoughts and Razorbacks to make sure. This left my cheeky Mek with a golden opportunity – targetting the only Razorback holding an objective on the other side of the gun (maybe just about visible on the top and to the right of this image). Filling it full of angry snotlings, the tank exploded, and the blast restroyed a second, damaged Razorback nearby! Two tanks with one gun! Between that and swarming squigs – who seemed to keep coming out of the large egg-squigs, the Ork side managed to hold more at the end and square everything up going into the last turn! We used the big gun to fire onto a table where an Imperium civil war was happening – Ultramarines vs Sisters of Battle, nearly, but not quite killing the immovable Canoness Smashypants. Even with the assistance of the Thunderhawk, the Black Templars were unable to clear their lines and stop the Squigs holding an objective. They also left a single Impulsor on their objective, which Blood Axe Tankbustas were able to remove. This left us dead even on objectives, but for a charge from some Blood Axe Nobs into what was the Snakebite corner to rest control of one from the Emerald Knight veterans. Amazingly this huge game ended up going right down to the wire, decided by the final action, and ending in an Ork (and Squig) victory! WAAAAGH!!!
Hope you enjoyed the read, and thanks to everyone involved. Big games like this can sometimes be a bit of a drag, especially if you are all but knocked out early, but that big shot from the Shokk Attack gun was well worth sticking around, and it ended remarkably close! Thanks for checking this out, and stay safe!

This is one of the last of my 15mm armies.  I only have some Shivan Witches, and the rest are small ‘dozen minis or less’ random purchases. After that I am switching to 28mm Mantic*; for my “demon-possessed stormtroopers vs rogue AI vs scientists with pet monsters” homebrew sci fi horror rules.

*I could possibly review the 2nd Ed Deadzone rules, but it may be a waste of time as 3rd Ed is coming…

Why that shade of blue headgear? Well the bloody Privateer Press paints are in these horrible lids that crack around the edges and let air in, so I feel like I have to use them before they inevitably dry up.  Why everyone can’t use a sensible squeeze bottle like Vallejo *shrugs*.

The mecha are also Rebel minis and come with a range of weapon loadouts you can choose (including shields and melee weapons). As usual I choose neutral paint schemes for my mechs as they do double duty in 6mm games. (All my mecha are grey, tan or olive for this reason). They are giant mechs next to old Epic infantry, who barely come up to their knees.

The skimmers are the GZG ones I painted last week; with an eye to using them for this force. Still have some $1 dune buggies from K Mart I could add…

As usual, I enjoy painting 15mm as you can do an army in an hour or two. The Sahadeen are a little small (I prefer my 15mm on the bulkier side) but they are very useful, versatile sculpts – I could see their hoods and masks being useful as generic cultists, vampire acolytes and even snow troops, and I have accordingly left a dozen or so unpainted for that purpose, later down the track.

Although I’ve painted up no fewer than seven 15mm forces in the last fortnight, this is only half my 15mm forces – I also have table-ready GZG UNSC, Khurasan Felids, GZG Prawns, GZG New Israelis*, some mostly-GZG I painted in 2015; and a sister army. Or at least that’s what I can see in the cupboard. Who knows what further digging in the shed may reveal? The ability to buy a 40K-size 15mm army for $50-$60 back in 2015 or so was obviously addictive.

*I am due to take all these out and check them for damage/rebase if needed and I can do some daylight photos if anyone is interested. These photos have been pretty poor as I paint and photograph at night – without my kids around to ‘help’

Nostalgically, I remember the postage times of yore – GZG was famously fast – once I ordered some minis on Thursday (from UK) and they arrived (at my door in Australia) the next Monday.  Fast cheap postage – something I’ll be able to tell my grandkids about – and they’ll never believe it.