You may remember at the end of last year I went to a tournament at Grim Dice Tabletop Gaming in Grimsby – well I went to another one. Same format, 2000 points, three games, though this time using the Nachmund GT pack. As before unpainted was allowed and full painting points were awarded to everyone.
I’m going to use the same format for this post as last time as well – brief army list description then a mini report of the three games, followed by some of my thoughts. So once again I took an attempt on the Green Tide style list, though once again I didn’t go full horde, partly due to time concerns and partly as this is the way I’m leaning towards this build. The Boyz are great for board control and bullying troop units in melee, but they can struggle against tough targets and against heavy concentrated firepower. Currently I think spending a lot of points to buff them is a bit of a trap (outside of Bosses who do their own heavy lifting) so ‘support’ units take the form of units that can kill things Boyz can’t and/or play the mission.
With that in mind, here’s the list; Snakebites Battalion and Patrol, starting with 8 CP

So 90 assorted Boyz forming the core of the list, with some light vehicle support, couple of little 6 man units for retrieving Nachmund data etc, two killy bosses and a bit of unreliable but potentially deadly fire support. The Kans in particular feel like a bargain with the new points costs – in previous editions they would have got rokkits every time but now they are so cheap without them I’m using them as just a melee unit. The Shokk Attack gun and Flash Gitz were my big decisions before the event – I’ve not been convinced by either of them before but they filled the gap of shooting units and have to potential to swing into being really killy. The Mek also let me go without psychic to free up Abhor the Witch, which is nice.
So, on to game one, against Ash and his Necrons – a bit of a classic mix of Necron units not going too heavily in on one thing. Plenty of Skorpekh Destroyers to get up on points and lots of smaller units to play the mission, with a Night Scythe to deliver some of them. The mission was Conversion, five objectives with corner deployments and bonuses on offer basically for holding the objectives. For secondaries I chose Stranglehold, Retrieve Nachmund Data and Stomp ‘Em Good (basically Grind but only melee counts). Ash picked the classic Engage on All Fronts and RND combo plus Grind Them Down. 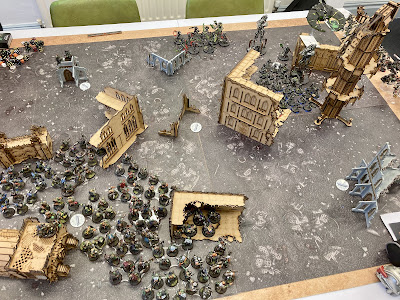 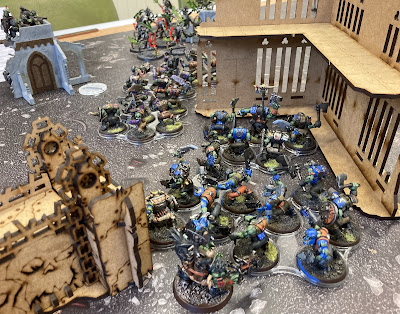 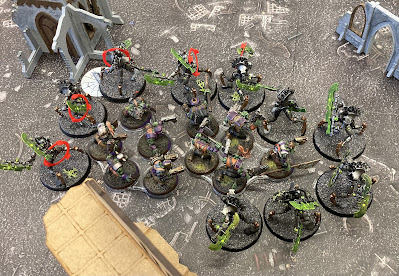 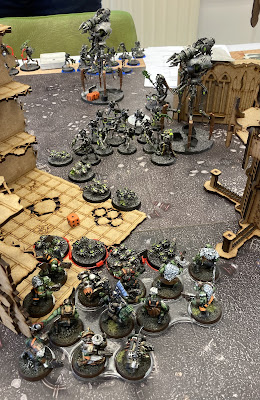 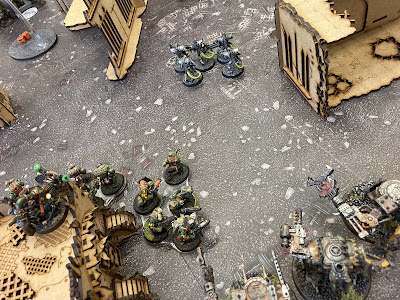 I got first turn and everything moved up to hold objectives where possible, then the Destroyers struck to wipe a unit of Boyz, but it put them in a bad position for turn two when they got surrounded and beaten down by both Bosses and a load of WAAAGH!ing Boyz. The rest of the game largely followed a patern of Necrons grabbing a point then the Orks pushing them straight off, while I pushed further towards the Necron lines. We both lost a lot of models, but kept our home objectives, though the Orks were comfortably ahead on the primary points. 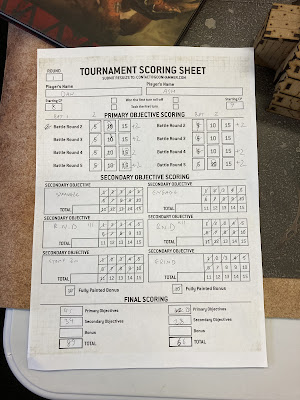 89-66 is a fairly comfortable score but certainly not totally one sided. Ash was at his first tournament so I was glad he didn’t get totally battered!
On to the game two, this time against Conner and his Drukhari – a mix of elements as one might expect for DE, but a focus on two blocks of three Talos and lots of small melee specialist units. The mission was Tide of Conviction, six objectives with most of them in the middle, and bonus points on offer for holding ones in your opponent’s half, with extra available for holding them at the end of the game. For secondaries I went with Raise the Banners High, Stranglehold and Bring it Down, while Conner picked the Engage/RND combo and the highest scoring ‘kill’ secondary vs my army, No Prisoners. 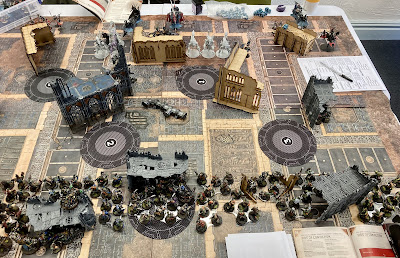 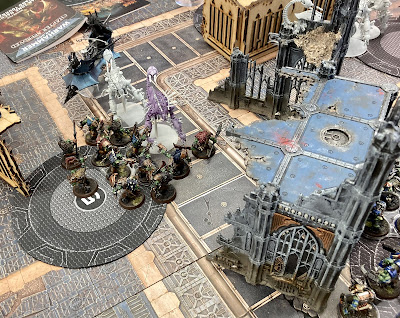 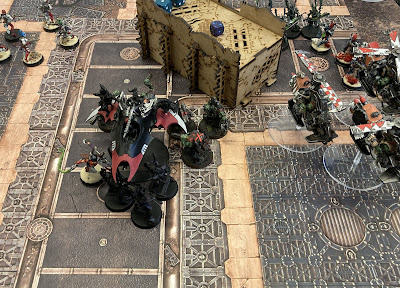 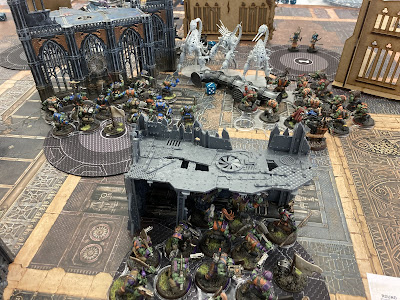 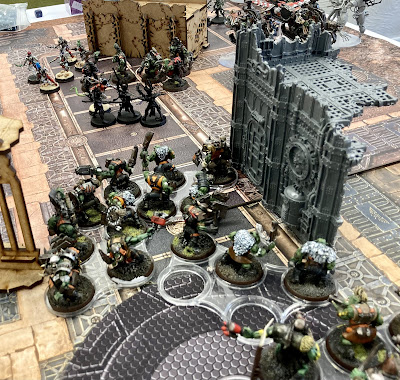 Once again I got first turn and it was largely uneventful, raising some banners and running forward. The Drukhari response was to move up onto objectives and blast some Kans with dark light. Turn two saw the killing really start, Beast Snaggas and Kopta Rokkits downing a couple of the Talos while charges on the right flank took out some transports. Casualties were high on both sides, Orks are pretty good at killing T3 elves if they get to fight before them, and Conner got some pretty poor rolls with his Incubi, both to activate their fight last ability and on the wounding on 4 ups.
Mid game we both had a significant failure that swung the game one way then the other. I failed a very short charge over a pipe into the second Talos unit with a full boyz mob, onto an objective, while Conner’s Wych and Succubus got interrupted on by my shoota boyz and battered to death with gun butts before they could fight. The game came down to the last turn, with the one remaining Talos clearing out one of my objectives and my Stormboyz failing a charge onto Wracks on one of Conner’s. 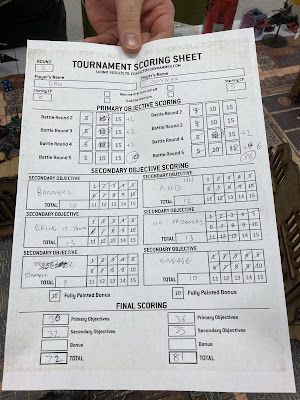 81-72 to the Drukhari, in spite of some bad luck the last turn scoring picked up some big points for the DE. I felt like I played it really well but just didn’t quite have that little extra something to claim it in the end. I think up until the last turn we both thought I was winning. A loss is a loss but it definitely feels like an improvement from the second game vs Drukhari last time.
And the final game was against… Rick and his Orks, my first opponent from the last event. Rick had swapped out his Speedfreaks for Beast Snagga heavy Snakebites, so this was going to be a very interesting game as he looked for some revenge! The mission was Data-scry Salvage, a six objective mission with one in the corner deployment zones and four on a middle line. Bonus points were awarded for doing an action on your home objective, equal to the number of central objectives you held. My secondaries were Assassinate, Engage and RND, while Rick picked Stomp ‘Em Good, Engage and RND. 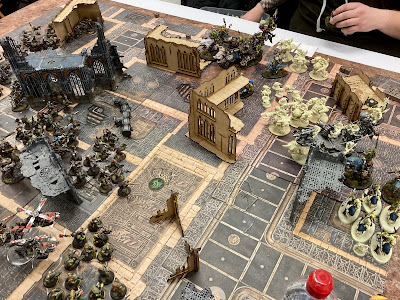 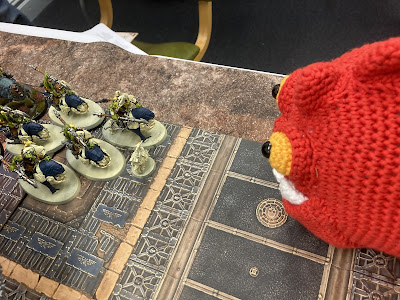 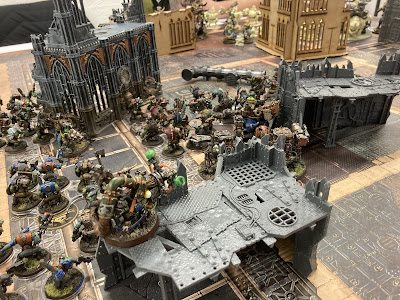 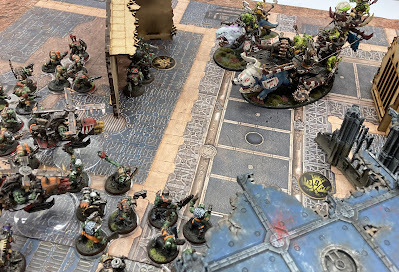 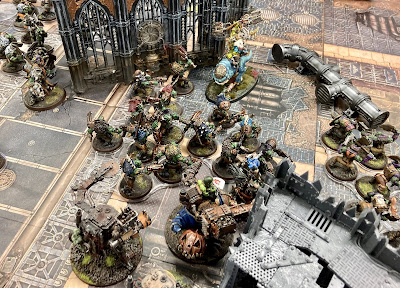 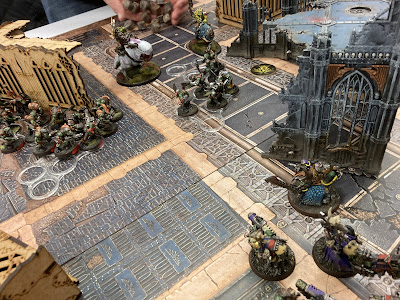 Once again I got first turn, moved up and scored a few points. I did some ’token’ shooting, but this time it really powered up – the Deffkoptas on the left flank wiped a full unit of Squighog Boyz, and the Shokk Attack Gun blasted most of another! In Rick’s turn one the WAAAGH! was declared and all his melee units crashed into my front line in a huge wave of destruction. A couple of turns of our fronts bashing into each other occured, with CP combat interruptions causing huge swings – at one point a unit of shoota Boyz interrupted to batter a mob of Beast Snaggas, wiping them out and claiming an objective. Rick’s units were dead killy, but were hampered significantly by the Snakebite trait – we were both on the receiving end for once! I got my Stormboyz in behind the rear objective to RND and disrupt the grots holding it, and the Shokk Attack gun absolutely was super charged this game – two rolls of 11+ for it’s srength to dish out mortal wounds, one of which killing a Squigasaur Boss, among several other good shots into Squighogs.
With all the killing across the centre line, and it being a ‘hold two’ mission, scoring started pretty slowly, but in the end with few units left for me Rick was able to score decently on the primary, however with his losses he was unable to score much for his secondaries, while I maxed assassinate thanks to all his squig mounted characters. It was a nail biter… 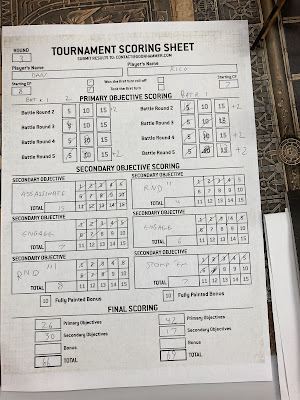 Final result, 69-66 to Rick’s Orks, once again decided by the final actions of the game – in this case his Kans blasting my Beast Boss off an objective to give him ‘hold more’. What a game!
I ended up going 1-2 again, on paper not an improvement, but the two losses were both super close and could have swung the other way with a roll or two – possibly just going first did it for me in the end? It definitely felt like this list had more to give me than the last one, and I’m sure I played it much better. I’m not immediately sure of any big mistakes, maybe I should have put the Kans into reserve vs the Drukhari and their dark lances, and I probably shouldn’t have vs the Necrons? Though I was hoping for a better result I’m very happy with how the games played out, all three were fun and the last two were just really intense – but in a good way. (Though there is something to be said for getting smashed in game three so you can go home early!)
Looking at my list, I’m pretty happy with it really. I think I’ve proved for me that a Boyz heavy list can at least play the game if not magically become top tier competitive, so I might not take it again next time. But if I did I think I’d be looking at the Flash Gitz as a possible cut – they were decent but hampered by S6 against two of my opponents, I think I might get the Meganobz back in instead, they aren’t very shooty but they are at least a threat to higher toughness units. I’d also look at unit sizes, I think the two shoota mobs could go down to ten – this keeps them cheap for holding back on objectives and with a lower power level it makes strategic reserves a decent option. I’m glad I took them though, their shooting was handy and both units earned their keep in melee! With the spare points I’d probably up the Beast Snaggas, since they are a proper threat to a lot of units out there, and maybe grab a unit of grots for actions and the like.
Anyway, once more, thanks to everyone, Grim Dice for running, my opponents for excellent games, and you for reading. Hope you enjoyed, and please stay safe out there.