I’ve kinda been mass-producing rank and file but I do need some heroes (LOTR does hinge around them, after all). Usually I spend more time on them but they are strictly to tabletop standard as I get tired easily. 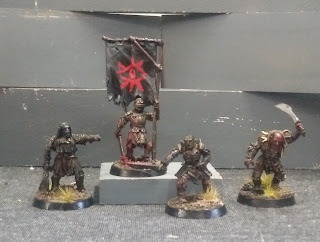 I got these 10+ years ago; they’re the original 2001-2005 sculpts. While Grisnakh (far right) is recognisable from the movies (as the one who chased Merry & Pippin into the woods and got stomped by Treebeard) I needed a quick google to find Gorbag and Shagrat and a banner bearer. They are all minor ~50 point heroes. 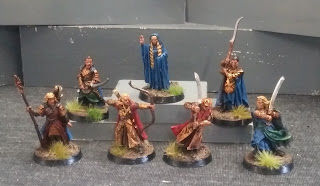 I needed the collector’s guide to identify a few here. While Elrond, Galadriel (in blue, not white, as I hate painting bright whites) and Haldir aligned with their movie versions, I didn’t recognise Legolas’ dad (Thranduil, far left) and neither Gil-Galad or Glorfindel (top right and bottom right respectively). One of the elves is just a standard metal warrior who I gave a red cape and made a captain.

The elf heroes are some big hitters (in the 160-170pts range). To give you an idea of scale, a normal orc is 5pts. From memory, Glorfindel is a monster in CQC, easily soloing ringwraiths and capable of going toe to toe with balrogs. Why the heck he wasn’t invited as part of the Fellowship is beyond me. I kinda wonder how the movies would have went if he was included. Gandalf wouldn’t have taken the high dive in Moria, for starters. 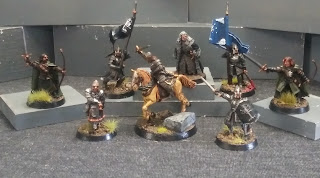 I’ve got a few Faramirs – foot, mounted, and in ranger guise. I have one of his ranger sidekicks – Damrod? – along with Denethor and a captain and some bannermen.

I’m reading Two Towers to my daughter and she was very excited to see Galadriel. Her complaint about my wargames is there’s never enough ‘girl’ fighters. Actually if anyone knows of any good sensible-sized female heads I’d like to know, as some of my modern special forces have had head swaps to turn them into girls and I’m running low. 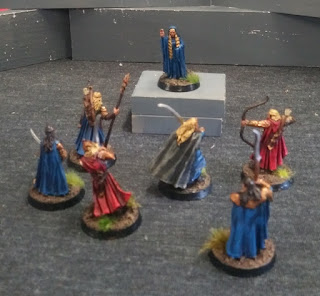 My 8-year daughter took this shot, posed as she decided Galadriel was the most important character. 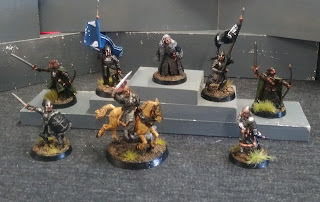 She also correctly identified Denethor as ranking leader of Gondor and asked if both her photos could be included on ‘your internet thing.’  She has offered to take over photography for the blog if she gets to ‘set them up’ and pose them into dioramas.

Anyway, these heroes were not done to my usual hero standard, but they are functional and table-ready. My main aim is to clear out my 500+ strong LOTR pile, which has intimidated me for about 10 years. With 171 models completed this month, most of which are LOTR, I’m now past halfway – probably 2/3rds done.

Gondor is now joins Isengard, Elves, Moria, and Dwarves in the ‘battle-ready’ pile. Mordor is also good to go, but I feel like I should do something about the 60 or so cannonfodder orcs I have ‘spare.’

Only Easterlings and the intimidatingly-numerous Rohan remain as part of the ‘empire of undercoat’, and I’m quite excited about the former.

As usual, this post is just to track progress and inspire other ‘average’ painters. Often blogs have flawlessly painted minis, crafted over many hours and countless coats and layers. I actually find them intimidating rather than inspirational. I like to represent the ‘rest of us’ – the time-poor dads for whom the undercoat-wash-highlight is the pinnacle of artistic achievement.