I’ve been sick off and on (not COVID, but some other mystery fever which seems to randomly lay me out every second day) but I’ve actually found mini painting the one thing I can do with little mental effort. Or when listening to hours-long working-from-home briefings (it’s like a podcast, only less exciting).

Anyway, I finished off most of my Gondor forces as they didn’t require much mental effort. Black and silver, yay! 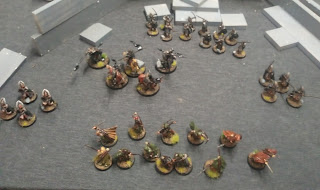 Combined with 24 rank and file I did the other day, I’ve got about ~60 Gondor troops. This is typical of each of my LOTR factions as 50-60 is the upper end of the amount of minis the LOTR rules can handle in a single battle.

Another 37 models takes my 2022 tally of painted models (all genres) to 153. In less than a month it’s probably better than my entire 2021 output, and I ascribe it to COVID which is only now sweeping through Australia.  (We had strict lockdowns and border quarantines, but in most states esp rural areas actually lived pretty ordinary daily lives, until our govt decided to ‘let it rip’ at Christmas and now we’re basically repeating everyone else’s mistakes, just a year later. I think the aim was to improve the economy but everyone’s doing self-imposed lockdowns anyway so it backfired and we went from 1 death a day average to 70+) 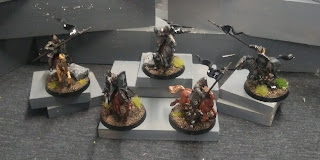 I only had 5 cavalry. Remember I bought these in random ‘job lots’ of about 50c or less a mini. 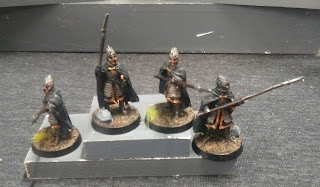 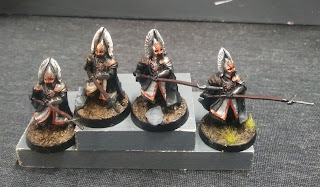 The metal Citadel Guard and Guards of the Fountain Court are probably OOP now. I really hate the universal switch to resin.

I only painted half my plastic Rangers of Gondor (actually have about a dozen+ metals as well); as painting non-uniform models in random colour schemes is too much for my tired brain – besides, the ‘only 33% of your force as bows’ rule means I’m not going to get to use many in a Gondor army anyway.

So I can now move Gondor into the ‘99% done’ pile. Only Rohan and Easterlings to go; plus the option of doubling or even tripling my 32-strong force of Mordor rank-and-file orcs – the latter doesn’t sound too fun to be honest. I also have ~50 metal heroes for various factions which I plan to be my ‘reward’ for finishing the armies. (I only do armies from LOTR movies, not the Hobbit movies, which I regard as non-canon*).

*I ranted about Tolkien’s long-winded over-descriptiveness in another post, but having recently attempted Eragon with my daughter I appreciate Tolkien more. While the pacing can be excruciating, at least Tolkien has great literacy skills! Eragon is like reading a fanfic by Grade 7 kid who just discovered adjectives and transferred the plot of Star Wars to a fantasy setting.

I had hopes of doing more creative stuff like working on and playtesting rules and doing articles on game design, but my brain is too fuzzy. Well, at least the lead mountain is diminishing!

Before I get too cocky, I realise I still have a LOT of Infinity models that sit staring accusingly at me but I’ve always felt my painting skills were inadequate for their sculpts at the best of times…