First report of the year, back to visiting JP (who I’ve borrowed some pics from) for some Garagehammer with 2000 points of my Death Guard warband taking on the Cadian Guardsmen and their Baneblade! We decided to play with the Open War cards for this one – I think it’s become my default for ‘normal’ 40k games, that aren’t either tournament style or narrative scenarios. 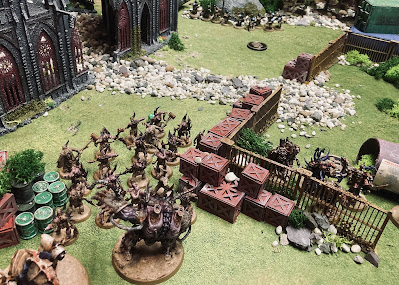 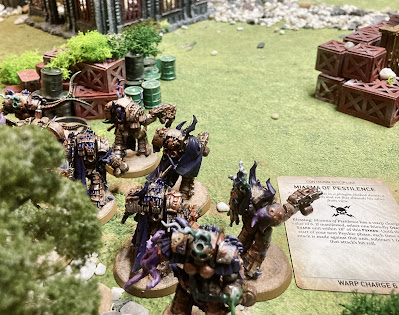 My collection of ‘dry’ Death Guard, known as The Desiccated, brought a Mortarion’s Anvil battalion, led by a Lord of Contagion with both the plague company warlord trait and relic. He was accompanied by a Malignant Plaguecaster, a Foul Blightspawn, a couple of units of Plague Marines, a couple of possessed squads, some Poxwalkers and a spawn, and a big brick of ten Blightlord Terminators. Assorted armoured support came from a Blight-Hauler, Bloat-drone, Plagueburst Crawler, a Rhino and a new edition, a Helbrute. 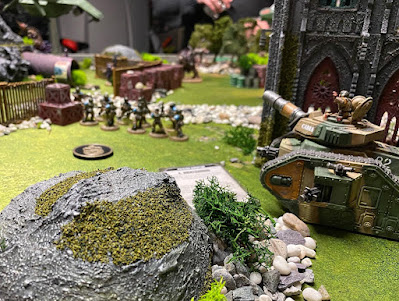 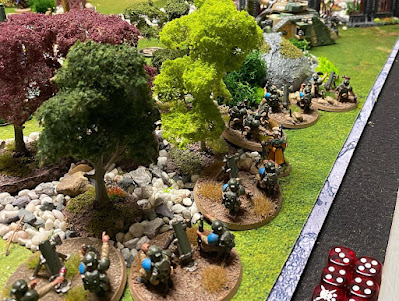 The Cadians brought with them a bunch of infantry squads, including two units of mortar teams and two riding in Chimeras, a couple of Bullgryn units in Valkyries, a Basilisk and the aforementioned Baneblade. They were led by a gaggle of officers, including a Primaris Psyker and a Tank Commander with the relic battlecannon. 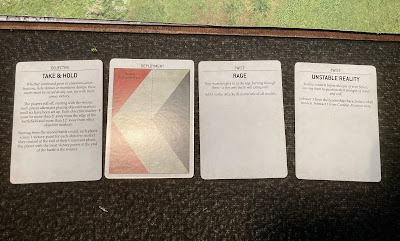 Here’s the mission. Six objectives scored in the command phase, the arrowhead vs corners deployment, and for a laugh we drew two twists – plus one attack and -1 leadership and combat attrition. Probably to my benefit with all those squishy, scared guardsmen. 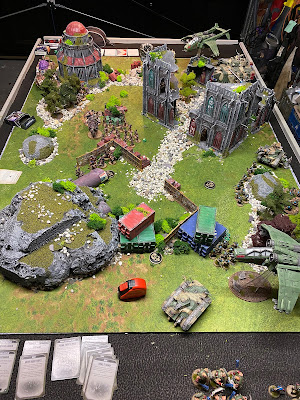 Deployment – Guard in the corners, Chaos up the middle, with some support units hiding on the flanks. The big unit of Terminators and the Lord of Contagion waiting in the warp to drop in later. The Baneblade deployed on the left flank, but the PBC and Rhino, loaded up with Possessed, were both behind an obscuring building so would be safe for a bit at least.
We rolled off, and the Cadians got first turn. JP had a bit of a think about it, but chose to go first (still a choice in open play) since he did have a lot of big guns and I didn’t. 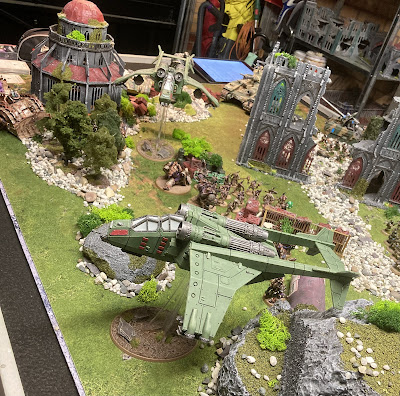 Guard turn one, the Valkyries zoomed up, Chimeras and Guardsmen moved onto objectives, and the Baneblade rounded the corner to get a firing lane. Valkyries opened up with rocket pods to clear the Poxwalkers after the mortar squads had taken a chunk out of them, the Bassie and the Tank Commander took aim at a Plague Marine squad, but managed to leave the champion alive. The Baneblade spoke last, splitting between the Blight-Hauler and the Helbrute. The Hauler ate the big cannon, blasting it apart, and the rest stripped the ‘brute down to three wounds. Could have gone better, could have gone worse. 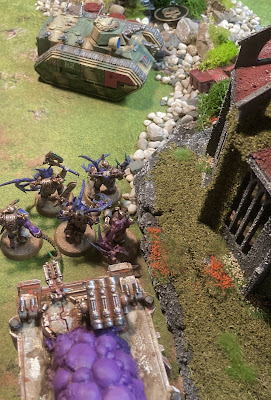 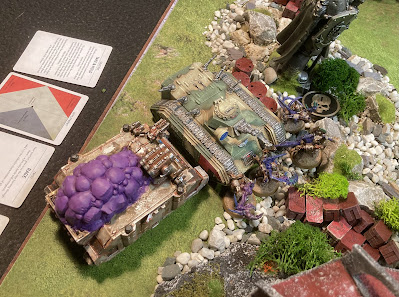 Death Guard turn, and we were in a target rich environment. Sadly not much gun! The Plagueburst Crawler did a good job degrading the Basilisk with a mortar shot, but most of the other shooting missed the Valkyries – though the Plaguecaster had damaged one with mortal wounds and the Blightspawn took some wounds off the other with his gross hosepipe. Then the charge phase, Possessed and their Rhino went into a Chimera, thankfully not killing it and disgorging an infantry squad onto an objective. 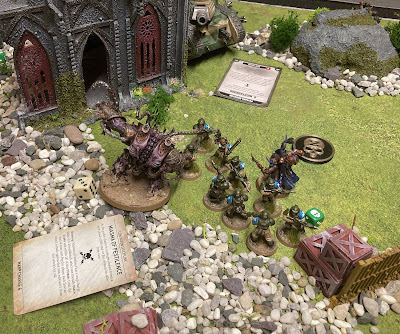 The damaged Helbrute and the lone Plague Marine Champion charged a central guard squad on an objective, killing enough that with morale only the sergeant survived, denying that point as well. 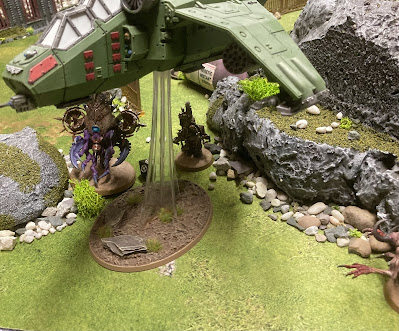 Finally the Bloat-drone floated into a Valkyrie with it’s Flesh mower. Thanks to the Rage twist it had 15 attacks to tear the flyer out of the sky – causing it to explode and drop the Foul Blightspawn to a single wound! 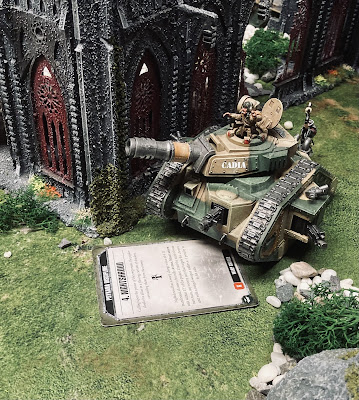 Onto Guard turn two, they picked up two points for objectives in the large ruin and on the right flank, then opened fire! Mortars stripped a wound of the Plague Marine champion, but he survived firepower from the remaining Valkyrie (which dropped it’s Bullgryns on a central objective) with a CP reroll, forcing the Tank Commander to split fire and pepper him with heavy bolters. Sadly that didn’t save the Helbrute who got battle cannoned. 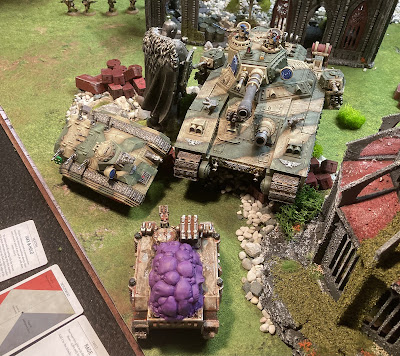 The Baneblade had a bit of a whiff in shooting, killing one Possessed marine and failing to kill the drone with it’s big cannon. It performed better in melee however, grinding the Possessed beneath it’s tracks and securing an objective with it’s armoured bulk. 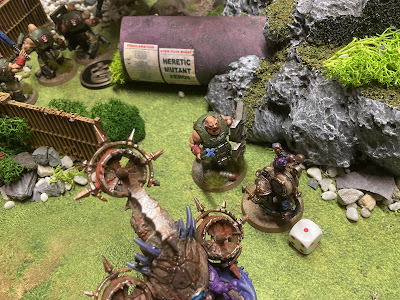 Bullgryns from the exploded Valkyrie decided to charge the Drone and the Blightspawn, which went pretty badly for them. Two of them melted from overwatch, the last one failed to kill the one wound character, and then promptly failed morale and ran away – or possibly he was just too stupid to get out of the puddle of toxic goo where his friends had melted. 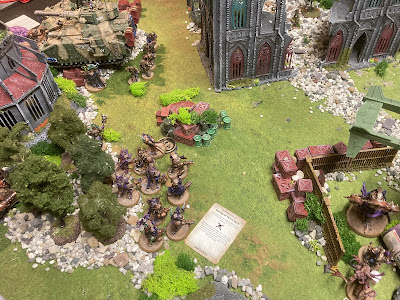 Death Guard turn two – I picked up a point for one objective, though I’d been pushed off the others and the Militarum’s aggressive movement meant the Terminators had to drop in fairly far back. I had originally intended to ignore the Baneblade and try to kill everything else, but it had pushed forward and was on an objective, so it was the only realistic target for much of my force. Shooting and psychic took some wounds off it, but it would mostly have to be done in melee. Elsewhere the single remaining sergeant that survived the Helbrute assault died to combi bolters, and the Fleshmower mowed through the rest of the Bullgryns. 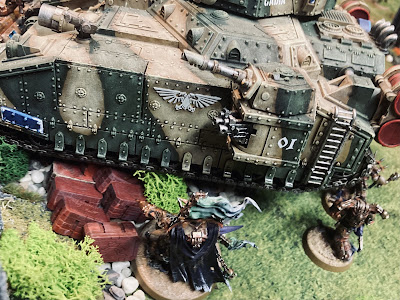 The second Possessed squad charged one end, while Plague Marines went in the other, and the Lord of Contagion made his deep strike charge to pile into the side of the metal beast. Thanks to the Warp Insect Hive he managed to make all his hits and wounds to finish it off… 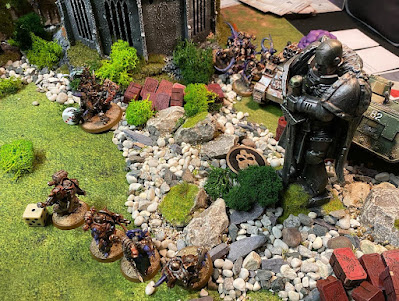 Big boom! A few marines died here and there, and the Lord took five mortal wounds, leaving him on one left! The Chimera also ended up on one wound, importantly not quite enough to let it’s obsec cargo fall out onto the objective. 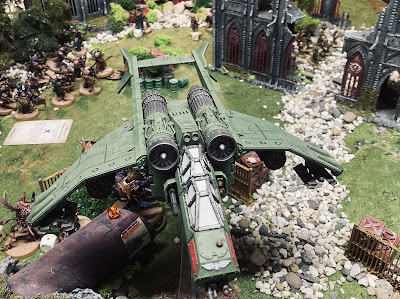 Losing assets fast, the Militarum picked up another two for the same couple of objectives at the start of turn three. Firepower cleared most of my remaining Plague Marines and the Tank Commander finished off the Bloat-drone. Some cheeky Guardsmen got out of the Chimeras to run up and control two objectives and deny me points again. 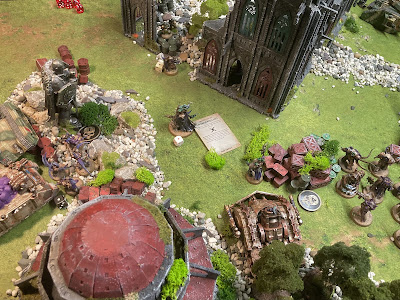 Just the one point once more for the Death Guard. Time to push the guard off once and for all! I got lucky with the PBC’s shooting this turn and the Entropy cannons rolled maximum for 12 damage on the Tank Commander, destroying it and leaving an objective unattended. Then, disaster! The Terminator blob failed a charge into Guardsmen on an objective, and the Lord of Contagion failed the charge into the big ruin! 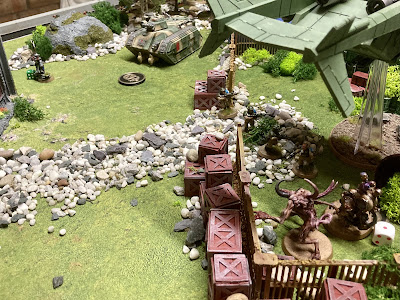 The Foul Blightspawn and Chaos Spawn did a good job on the Guardsmen in the shadow of the hovering Valkyrie, but they were unable to push them off. This mean in turn four the Cadians picked up a further three points, giving them a commanding lead. A Chimera made a long advance to go onto the objective previously held by the Tank Commander, and the artillery shooting finished off my Possessed (after they had killed the one wound Chimera and suffered a casualty from it’s explosion!)
Going into Death Guard turn four I was on two objectives, so the score was 7-4. We did a bit of working out, at this stage it would be possible for me to secure a draw if everything went perfectly… 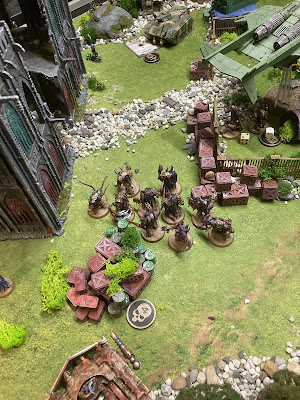 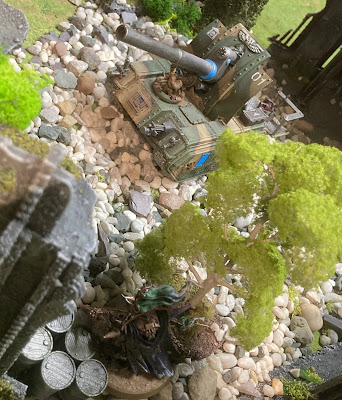 Sadly, it did not go perfectly! The PBC couldn’t repeat it’s feat and clear the Chimera off it’s objective, and the Terminators once again failed their charge, this time into the ruin to take the objective there. The Lord of Contagion continued in good form however, getting in and killing or scaring away all the Guard in there, though on his own unable to outnumber the Basilisk. He did survive it’s firepower at point blank in turn five however, so that was something!
Cadians picked up another couple of objectives to finish on 9 points, to 6 points for the Death Guard with all the objectives counted. A hard fought win for the Astra Militarum, after losing their prized Baneblade. The Terminators were untouched but were unable to get where they needed to for victory.
A great fun and great looking game as always – a good way to start the year! We were initially a bit worried that all the guns on the Guard would make it a bit of a non-event, but the DG are disgusting, and resilient, and they hung in there well. In hindsight, I probably should have deployed the Terminators right up centre in the first place instead of the Poxwalkers – maybe they could have gone into reserve so as not to present such a good target for the mortars. Regardless, I’m still having fun with the Death Guard, so we should see them again before too long.
Thanks for reading, hope you enjoyed it, and stay safe out there.