If you’ve been following the blog recently you’ll no doubt know I’ve been doing a big Nurgle army commission, based on the Pallid Hand scheme and using a lot of contrast paints and sponged highlights for a nice quick and effective Nurgly look. So far I’ve done Plague Marines, Terminators and characters, Daemon allies, Heavy support and Fortifications, Poxwalkers and most recently the Daemon Engines. Now we’re finishing off (kind of) with a load more Plague Marines and Terminators: 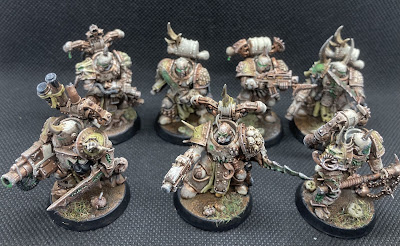 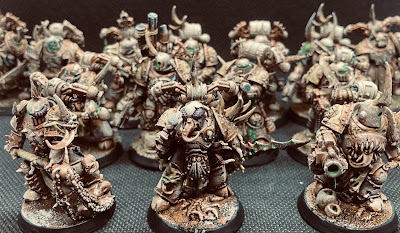 Nothing much to say about these other than that they are pretty much the same deal as the initial wave, just bulking them up to around 30 models with a variety of options. 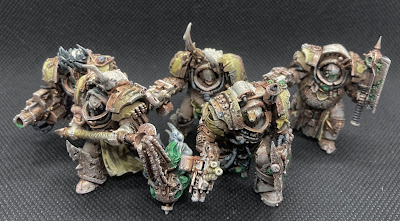 More Blightlords – either an additional unit or to bulk them up to ten. They don’t have bases yet as the client has sourced five of the now unavailable resin ones so they will be based up when received. 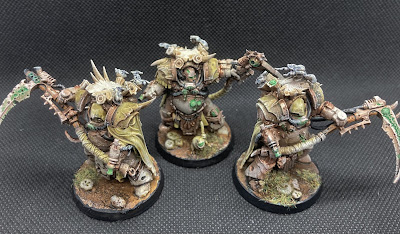 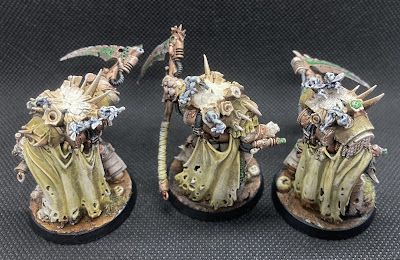 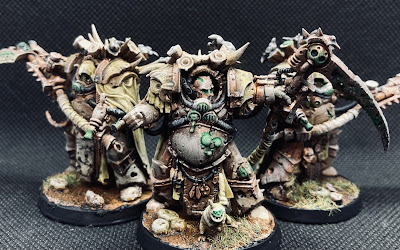 More Deathshroud as well – again could be run as a second squad or to bulk up the initial unit. I used the regular components rather than ‘champion’ parts for the squad leader so he could be either. (He does have a cheeky Nurgling though to mark him out!) 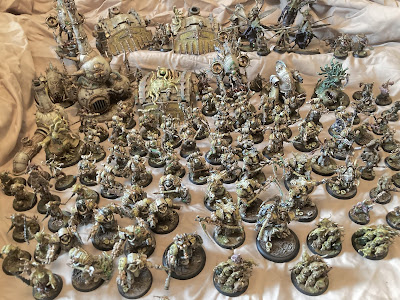 Finally, before boxing them up I had to do a full army shot! Poor lighting aside, I think they look rather cool all laid out. I’m rather proud of this project, especially since it’s only been around two, two and a half months from start to finish. Well, I say finish – there are three more Deathshrouds making their way to me and there has been talk of Hellbrutes!

Anyway, the important thing is the client is very happy with them, and so I’m happy. I hope you all have enjoyed following this project, thanks for reading and stay safe out there.