In preparation for Rorkes Drift (followed by Isandlwana) I have been on the look out for suitable rules. Until recently the front runner has been The Sword and the Flame which I used in days gone by for my 15mm Sudan collection.

Recently though, two more have materialised that have caught my eye. One is a Pony Wars conversion but I am holding on that until I become more familiar with them.

The second is The Men Who Would Be Kings. 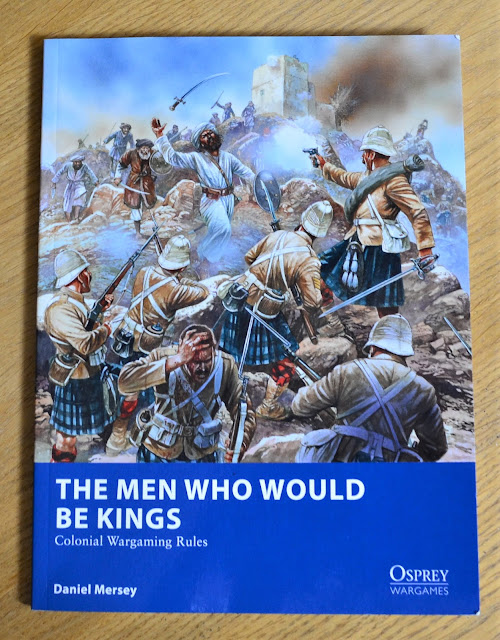 Inspiration for this is down to Little Wars TV who used them for a 6mm Isandlwana game. This piqued my interest being a skirmish game written for larger scales and how it could be adapted for large battle small scale actions. If this worked I could see all sorts of possibilities in other periods, in particular Ancients which my own rules are really only intended as a stop-gap until I find something I like.

There are actually very few changes, in fact really only one – distances. I have opted to simply convert from inches to centimetres as I have done in other rulesets.

I decided to use the rules on a test battle. There is a section in the book designed for solo play but for this game I am keeping it very basic just to see how the core rules perform. 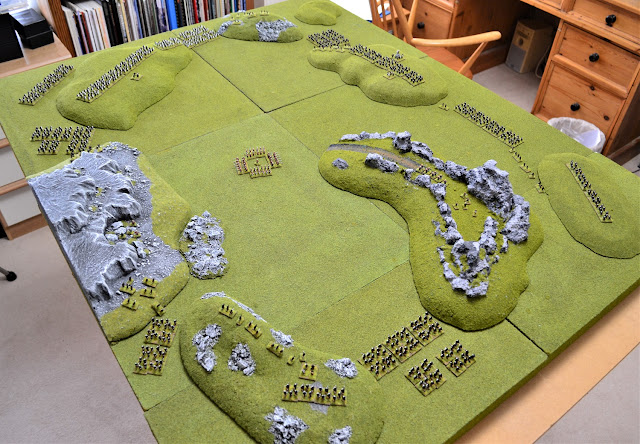 I have almost literally thrown a few terrain pieces down on a playing area of 3’9″ x 3′ creating a valley. Some of these rarely get to see the light of day so good to have an opportunity to use them. This particularly applies to the large rocky piece on the right that has never been used since being purchased on impulse over 20 years ago! All figures are 6mm Baccus.
The British force represents a 60 figure company of regular infantry sent out to scout an area. Accompanying them is an NNC Lieutenant with 4 European NNC NCO’s. Also a Commissariat officer and one of his privates.
The Zulus are divided into 20 figure units (4 bases) and 12 figure rifle armed units. 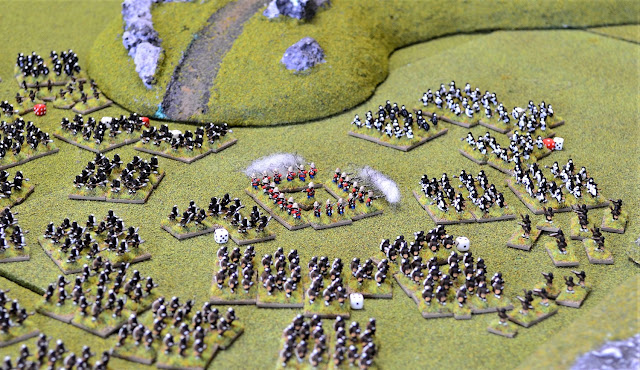 Including units that fled the field the Zulus lost 335 figures, or almost a third of their number. The British lost all of its 67.
On the face of it a significant loss for the Zulus but it must be remembered that here the British were outnumbered 15:1 whereas at Rorkes Drift it will be almost 40:1. The rules were designed for a few units a side with the average force fielded leaving the British outnumbered around 2:1 to give a balanced action.
Although I have yet to finally decide on any rule changes to give the British a fighting chance, a few have come to mind. Examples:
When attacking only those figures in base to base contact will count in melee when the British are in Close Order. If not in close order the Zulus can include 2 figures for every one British.
Possibly introducing saving throws for the British although I may limit that to personalities.
Zulu unit sizes increased from 20 (4 bases) to 30 (6 bases).
Introducing Discipline penalties for Zulu losses. e.g. Loss of 2 bases = -1, 4 bases = -2. This will make it increasingly problematic when attempting to rally pinned markers.
There will be other changes such as dealing with fighting within buildings. Overall though I was quite impressed with the rules and I can see it would be easy to make whatever changes you feel necessary to add flavour to your own game.
I am tempted to try out the “Playing against Mr Babbage” section of the rules which is designed for solo play. One for the future.